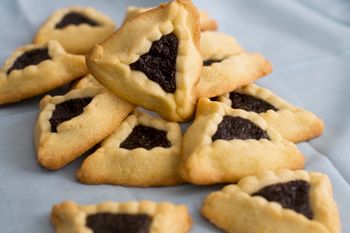 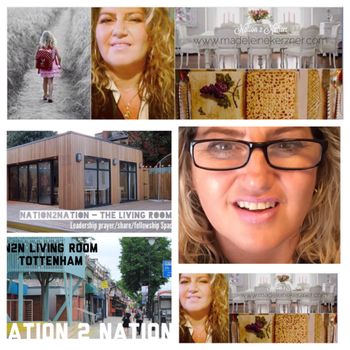 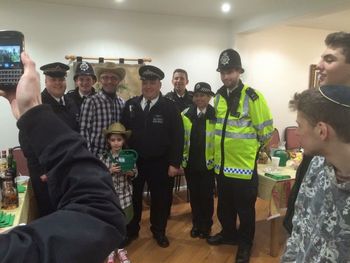 PURIM ( feast) is from the whole book of Esther and it's emphasis is on God's covenantal faithfulness and the defense of His people and His Kingdom.  A season of celebration and joy !

Here is an outline: In the month of Adar, this is usually always in March.

Its all from the whole book of Esther: we celebrate the victory over Haman who tried to destroy the Jewish nation,   but with much wisdom and the divine positioning of Queen Esther Adonai  turned it all around and the gallows that had been set up to kill Mordecai were used to execute Haman in judgement.

The summary of this season is victory over all opposition ! And it all working for our good and His Kingdom.
Romans 8:28 And we know that all things work together for good to them that love God, to them who are the called according to his purpose.

Adonai deals with all plots and schemes against His people (His Kingdom) and brings a great deliverance.

its is a season of standing still and seeing the salvation of God  !

The three main things that are done on Purim are.
1. Fun filled celebrations in worship gatherings (they read the book of Esther) "Hamantaschen" (המן־טאַשן), or "Haman's Ears" -- three-sided pastries filled with poppy seeds or other fillings. Some people also dress up with costumes during Purim services in celebration of Israel's victory !
2. Sending gifts of food and treats to others.
3. Giving to charity and to the poor. Giving to the less fortunate  (Tzedakah) is the Jewish way of sincere gratitude to Yahweh for deliverance. (A grace offering)
4. A festive real party celebration meal together.

The  three blessings recited In Purim are:

Blessed art Thou, LORD our God, , who sanctified us with His commandments and commanded us regarding the reading of the  Word. Amen.

Blessed art Thou, LORD our God, who performed miracles for our fathers in those days and  at this time. Amen.

Blessed art Thou, LORD our God,
who has kept us alive and has sustained us, and brought us to this season. Amen.

full details of Purim below: from Judiasm Teachings. (c) Chabad

It all began in Ancient Persia in the 4th century BCE. The Holy Temple that had stood in Jerusalem was destroyed more than 50 years earlier, and the Jews were subjects of the mighty Persian empire which extended over 127 lands.

Three years after King Ahasuerus ascended the Persian throne, when he felt secure in his new position, he celebrated by throwing a grand 180-day-long party for all his subjects. Following this extravagant gala, Ahasuerus hosted a smaller week-long party for the residents of the capital city of Shushan. In the palace's women's quarters, Ahasuerus' wife, Queen Vashti, hosted her own party for the Shushanite womenfolk.

On the seventh day of this party, Ahasuerus' heart "was merry with wine," and he commanded his wife Vashti to appear before all the partying men—he wanted to show them all her exquisite beauty. Vashti balked at this request, and at the advice of his advisor Memuchan, Ahasuerus ordered Vashti's execution.

The king immediately liked her, and Esther became the new Queen of PersiaWhen Ahasuerus' wrath dissipated, he was lonely for a wife. His servants suggested that he orchestrate a beauty pageant. Officers would be appointed in all the king's lands, and all beautiful girls would be brought to Ahasuerus. And the girl who would find favor in the king's eyes would be the new queen.

The leader of the Jews at that time was a Shushanite resident named Mordechai. He had a cousin, Esther, who was orphaned as a young girl. Mordechai raised her and treated her as a daughter. Though she had no desire to be the queen, Esther was forcibly taken to the king's harem, to participate in the contest. While all the other contestant beautified themselves with perfumes and lotions, Esther did nothing. But G‑d had His own plans. When Esther appeared before the king, he immediately liked her, and Esther became the new Queen of Persia. But as per Mordechai's directive, Esther refused to divulge her nationality—even to the king.

Mordechai to the Rescue 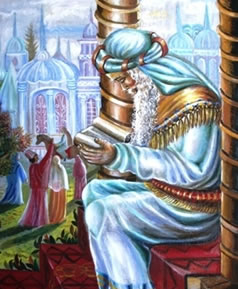 Mordechai at the gates of Shushan. © Ahuva Klein

Shortly after Esther became queen, Mordechai overheard two of the king's chamberlains discussing a plot to assassinate the king. Mordechai had them reported, and the traitors were hanged.

Meanwhile, Haman, one of Ahasuerus' ministers, was promoted to the position of Prime Minister. Haman was a virulent Jew hater; in fact he was a descendant of the notoriously anti-Semitic nation of Amalek.

Immediately after his promotion, the king issued a decree ordering everyone to bow down whenever Haman appeared. Now Haman would walk around with a large idol hanging from a chain around his neck. When Mordechai, a proud Jew, refused to bow down, Haman was infuriated. He resolved to take revenge against all the Jews and threw lots to determine the "lucky" day when he would implement his plan. The lot fell on the 13th day of the Hebrew month of Adar.

Haman approached Ahasuerus and offered him 10,000 silver talents in exchange for permission to exterminate the Jews. Ahasuerus, who was no friend of the Jews either, told Haman, "The money is yours to keep, and the nation is yours to do with as you please."

Haman immediately sent proclamations to all the king's land. These declarations, sealed with the royal signet ring, ordered the people to rise up against the Jews and kill them all – men, women, and children – on the following 13th of Adar. 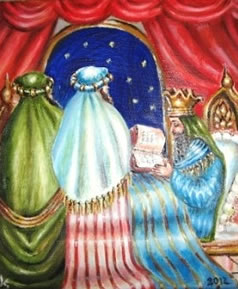 "If you will remain silent at this time, relief and salvation will come to the Jews from another source!"Mordechai became aware of the decree. He rent his garments and donned sackcloth. He sent a message to Esther, asking her to approach the king and beg him to spare her people. Esther responded that according to the rules anyone who entered the king's presence un-summoned would be put to death—unless the king extended to that person his golden scepter. "And I," Esther said, "have not been summoned by the king for thirty days already!"

Mordechai sent another message: "Do not think that you will escape the fate of all the Jews by being in the king's palace. For if you will remain silent at this time, relief and salvation will come to the Jews from another source, and you and the house of your father will be lost. And who knows if it is not for just such a time that you reached this royal position."

Esther agreed to approach the king. But she asked Mordechai to gather all the Jews in Shushan and let them all fast for three days and nights. And after this fast Esther would put her life in her hands and approach the king.

Mordechai complied with Esther's request. He gathered the Jews of Shushan – especially the children, 22,000 of them – and they fasted, repented and prayed to G‑d.

After three days of fasting, Esther donned royal garb and entered Ahasuerus' chambers. Immediately, the king extended his scepter. "What is it?" Ahasuerus asked. "What is your request?"

"I would like to invite the king and Haman to a small feast I have prepared," Esther responded.

Haman left the party a happy and proud man. Oh the honor he was being accorded! But standing at the king's gate was Mordechai – who still refused to bow to Haman – and Haman was enraged. When he arrived home, his wife and wise advisors counseled him to erect a gallows, and then to go to the king and request permission to hang Mordechai. Haman excitedly went ahead and put up the gallows.

The Beginning of the End 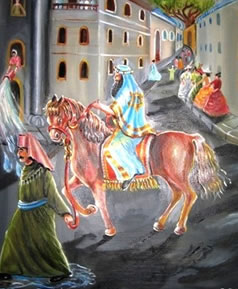 "Was he rewarded for this fine act?" Ahasuerus asked. "No he was not," the servants responded.

At that moment Haman entered the king's courtyard. His purpose? To ask the king's permission to hang Mordechai! Before Haman could utter a word, Ahasuerus addressed him: "My Haman, in your estimation, what shall be done to a person whom the king wishes to honor?"

Haman, who was certain that the king wished to honor him, responded: "Bring royal garment and a royal horse. And let one of the king's nobles dress the man and lead him on the horse through the city streets, proclaiming before him, 'So is done for the man whom the king wishes to honor!'"

"Great idea," Ahasuerus responded. "Now go get the garments and the horse and do so for Mordechai the Jew!"

Haman had no choice but to comply. On the next day he went and honored Mordechai as the king had ordered, and then immediately rushed to join the king and Esther for... 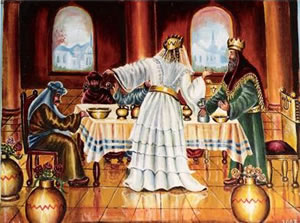 "What is your request?" a curious King Ahasuerus asked Esther at the feast.

"If I have found favor in your eyes, O King," Esther pleaded, "and if it pleases the king, let my life be granted me by my plea, and the life of my people by my request. For my people and I have been sold to be annihilated, killed and destroyed!" Esther then identified Haman as the evil person who wished to perpetrate this atrocity.

The king was greatly angered. When he was then informed that Haman had built a gallows for Mordechai, he ordered that Haman be hanged on that very gallows.

The Tables Are Turned

Haman was dead, but his evil decree was still in effectOn that day, Haman's estate was given to Esther, and Mordechai was appointed Prime Minister in Haman's stead.

But Esther was far from satisfied. Haman was dead, but his evil decree was still in effect. According to Persian law, once a king issues a decree it can not be rescinded. But the king gave Mordechai and Esther permission, and they promptly wrote up a decree that countermanded Haman's edict. The decree granted the Jews permission to defend themselves against their enemies. And by this time, considering that all knew that the queen and Prime Minister were both Jewish, no one would prevent the Jews from doing just that!

And the Jews in Shushan were oh so happy. Celebrations abounded!

On the 13th of Adar that year, the Jews throughout the Persian Empire mobilized and killed the enemies who had wanted to kill them. In Shushan, among the dead were Haman's ten sons.

Mordechai and Esther established a holiday to commemorate these amazing events. Jews worldwide celebrate on the 14th of Adar, while residents of walled cities – like Shushan – celebrate on the 15th of Adar. This holiday, called "Purim," is the most joyous holiday on the Jewish calendar.